Three Photographs (from the Vietnam War)

Driving south on Highway 89
along the west shore of Lake Cayuga
from Seneca Falls to Ithaca,
listening to a thin crackle of radio
before it’s lost beyond the hill:

A South Vietnamese general executing
a suspected North Vietnamese spy
just like walking down the street,
the moment the bullet strikes the brain

(why were we there, taking sides?)

A naked girl on fire, fleeing
her napalmed village

(the futile horrors we inflicted)

A young woman crouched over her dying friend,
shot by the National Guard at Kent State

(the war on our brothers and sisters at home)

and I say we and our because to see the photos
on the front page of every hometown newspaper
made us all complicit in the violence.

For Sale at Amazon.com

For Sale: Dating Tips For Conservatives: A New Poetry Primer for a Desperate Age

It will be available at Amazon in a few days, same price. I get a bit more money per copy with direct sales through Create Space, but if you get free shipping with Amazon, it’s worth the wait for you.

The title, Dating Tips for Conservatives, is taken from a line in one of the poems in this collection. This is not a political book, not aimed at conservatives, or liberals, or anyone else but poetry lovers.

Please have a look (and buy one, or two, or ten) 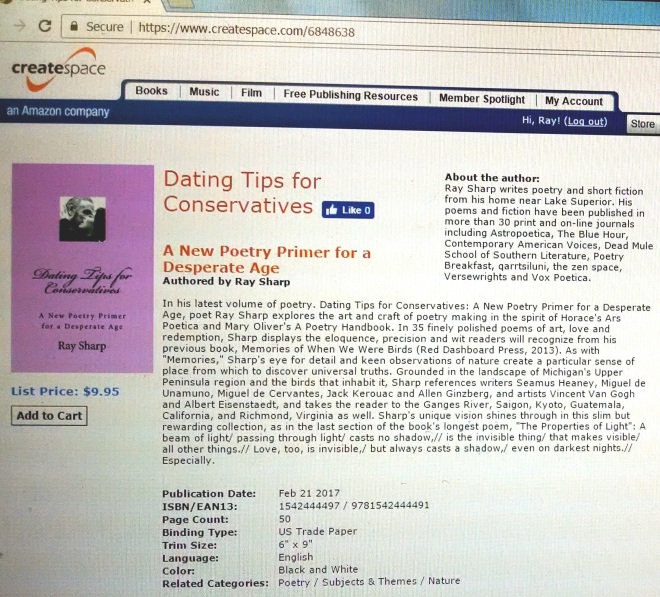 Looking for the Bard

Henceforth, my new and favorite poems will be at the new blog titled New New Liminga Blues.

Please follow me to (and at) New New Liminga Blues by clicking the live link.